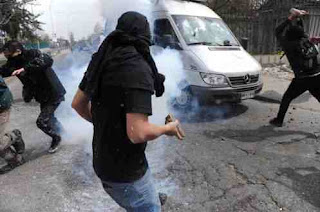 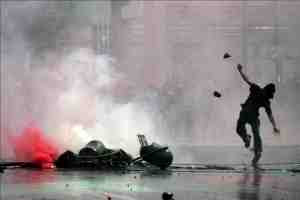 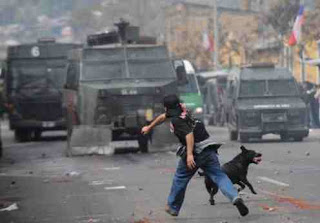 221 arrests. Four civilians and nine policemen injured in Santiago and other parts of the country.
...In the Santiago Metropolitan Region, 85 people were arrested, with many of the arrests occurring late at night. Three police were injured after being shot with pellet guns – two were shot in the eye and one was shot in the face.
In lower income areas of Santiago such as the Peñalolen borough, stones were thrown at passing cars. Special police forces had to intervene in the Villa Francia neighbourhood to stop a gas station from being looted. Power outages affected 104,000 households – as many as last year – after lines were cut during demonstrations.
A march from Plaza de Los Heroes to the General Cemetery in the Recoleta Borough started off peacefully, but ended in riot-like conditions near the cemetery.
The march began at 10 a.m. and was led by the Relatives of the Disappeared Detainees Association – a group representing the more than 1,300 people who were disappeared (and killed) during the 17-year Pinochet regime.
More than 8,000 people participated in the march, which culminated with the hanging of a wreath inside the cemetery.
However, just as the wreath was being hung, a mob appeared in the streets near the cemetery. Authorities did not intervene right away, and the protestors managed to destroy trash cans, tear down traffic lights, throw stones at police officers and assault two TV news cameramen. The police then stepped in with water cannons and tear gas.
Posted by sysiphus at 16:54