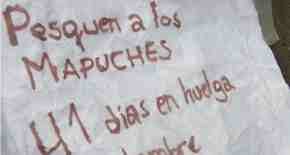 Some news, even if is on the surface, is less visible than that which must emerge from 700 metres of the earth's crust. A testimony to this obvious but no less important media condition, are the 33 miners trapped in the mine in San Jose Copiapo, Chile now, through no reason of their own, the main actors of a process of redemption from the bowels of the earth occupying the front pages of all the world news for almost a month. Their messages have been widely disseminated and give comfort concerning their living conditions, offering TV viewers everywhere dramatic images of faces tried by work and precarious conditions. Some of the first messages were on paper and the new Chilean president, Sebastián Piñera, exhibited them to the world in front of the cameras stationed on the mouth of the mine, to show the proximity of government to the working class in Chile that concerns over 800 thousand people, many of whom emigrated from Peru or Bolivia and in all cases are social representatives of the poorest classes. Among these many are represented by the original peoples of the continent: Mapuche, Quechua or Aymara.

Scripta Manent
Among the letters exhibited before the cameras, eager for news about the health of the miners trapped underground, apparently some that clearly challenged the government didn't find the way to appear on the screen. The miners, in two pages that were originally censored, declare solidarity with the civil battle begun almost fifty days ago by some Mapuche prisoners on hunger strike, and, contesting the words of the Prime Minister, ask him in writing to "Shut up".
Thirty-three buried miners have in this way made visible a civil battle that goes from the dictatorship of Augusto Pinochet (1973-1990) and has been taken up in July by 32 political prisoners, victims of "anti-terrorism special law" that discriminates the original Mapuche people and nullifies their legitimate demands for recognition. The letter draws a parallel between the two tragic stories and reads: "Free the Mapuche, 41 days on hunger strike."
This great example of brotherhood from a depth of 700 m should make blush those who, on August 30, the International Day of the “Desaparecido” prisoner [“disappeared” during the Pinochet dictatorship], easily forget the injustices still present in the "exemplary" Chilean democracy and refuse to deal with a story, perhaps still too recent and tame, woven of disappearances (over 900 reported in 2009 alone), violence and arbitrary detention often against the representatives of the Mapuche people, once the only population to have their lands recognized as an autonomous state by the Spanish crown and now branded as terrorists and persecuted by the blows of special laws and police violence.
Posted by sysiphus at 14:56