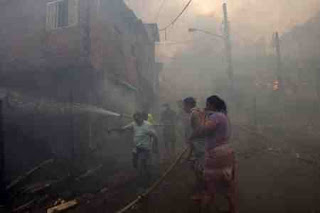 signalfire
Residents of Real Parque neighborhood in Sao Paulo have rioted over the authorities’ failure to act quickly enough to quell a fire which destroyed hundreds of houses.
Huge demonstrations took place during rush hour on Monday night as residents expressed outrage at the damages caused by Friday’s fire, a Press TV correspondent reported.
Neighborhood residents began their protest at a crucial intersection known as Marginal Pinheiros, our correspondent added.
Community activists also used radio devices to communicate with the crowd, and set two buses on fire, blocking traffic.
Riot police used tear gas and rubber bullets to disperse the protesters.
According to the Associated Press, the cause of the Friday’s fire is still unknown, but may have been due to power line failures. The residents had to use buckets of water to stop the fire, which destroyed at least 300 homes and injured 10 people.
The Real Parque ghetto, where more than one thousand families live in abject poverty, has seen various violent demonstrations in the past.
Posted by sysiphus at 16:20