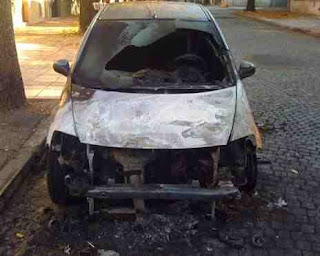 Communique:
We took to the streets again to practice what we say with our words and think with our brains.
We feel the need to do so because, as we can see, a newspaper published an article in Villa Devoto about the burning of car in the barrio in which it speaks explicitly of the arrest of a person allegedly responsible for the attacks. For this reason we are making it known that what they are saying in this newspaper and / or the police themselves is just a lie, they probably have not caught anyone, or if they did, they got a person who has nothing to do with this. That is why yesterday, September 15, 2010, at the intersection Melincue Chivilcoy we set fire to a car around 23 hours. In addition, we claim responsibility for the burning of other cars before that.
As we always say, we are doing this to combat the destruction that society is causing to the earth, that is why we're not on its side and with these actions we are warning that we will continue to attack it to stop what it is doing to the world.
We know that they care little or nothing of what we say, but we won't get lost in chatter and writings, something that has already been done. Only the comrades will understand, while those subjected to this system are so locked into the routine of work they have "need" of machines. We try to live differently.
Amigxs de la Tierra
links of the press:
links della stampa:
http://www.devotomagazine.com.ar/files/infozonal_nota.asp?id=367
http://www.devotomagazine.com.ar/files/infozonal_nota.asp?id=384
Posted by sysiphus at 04:01