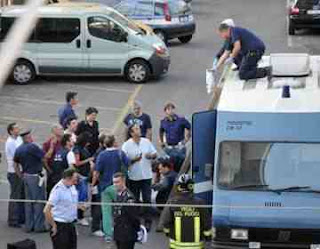 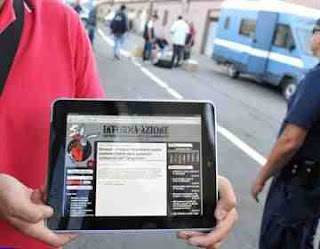 translated from culmine
2010 09 03 - (From Italian media) The incendiary device found this morning on the roof of a caravan used as a mobile office of the police parked in the area of the ferry terminal in the port of Genoa could be of anarchist insurrectionalist matrix. . The Digos [political police] in the Genoa police investigation is focusing on the anarchist world which with this action would intend to express solidarity with the Marassi prisoners and those of other prisons. The action was claimed by an anonymous email on the main anarchist and antagonists sites. This was the message: "On August 14 in Genoa a box with 3 litres of petrol and ignition was positioned and ignited on the roof of a mobile police station parked in the port in the ferry embarcation area. Solidarity with prisoners struggling in Marassi and in all other prisons." The claim, submitted by anonymous email is signed "Anticarceraria e prigionieri" ("Antiprison and prisoners") The Digos considers it a low profile action.
The bomb was made with a cardboard printer toner box and contained a woollen sweater drenched with petrol, a two-litre inflammatory bottle, triggered with cubes of fuel for fireplaces, matches and a cigarette. The type of ignition (common in the anarchist area) is the same as that used last April for an attack on mobile phone masts on the heights of Genoa. The bomb may have been placed from above from a causeway, with string on to the maritime police's camper omost likely at night. The forensic science are making specific tests on the material composing the bomb. THE CHRONICLE Incendiary device placed on a mobile police station parked in front of the ferry terminal. The action, foiled by police intervention, was claimed by an anarchist group of the area "Anticarceraria e prigioneri" with an anonymous email on the sites of Controinformazione e Lotta alla repressione. The text of the claim briefly describes the reasons for the action and concludes that the act is "in solidarity with prisoners who struggling in Marassi and in all other prisons." The bomb found this morning was packed with a cardboard box containing a sweater drenched with gasoline and ignited by a Molotov cocktail and cubes of fuel and matches. The type of ignition would convince the investigators of the authenticity of the claim: it has actually been used in several demonstrative actions mainly in northern Italy. According to preliminary information, the box was lowered from an elevated road on to the police vehicle that was in a designated parking area.
Posted by sysiphus at 16:02