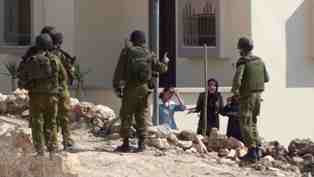 September 20th, 2010 - Bil’in – PNN – an Israeli army force invaded on Monday midday the village of Bil’in in central West Bank and clashed with local youth.
Israeli troops stormed a number of homes and tried to arrest local youth, during the search campaign, soldiers fired tear gas at local youth who responded by hurling stones at the soldiers.
At least a dozen civilians suffered effects of tear gas inhalation and were treated locally, witnesses reported.
The village of Bil’in organizes a weekly anti wall protest for the past five years; after long fight in the Israeli courts, the army was ordered to remove the wall built on villagers lands; tell the day the military refuse to implement the court order and attack the weekly nonviolent actions organized by the villagers along with their international and Israeli supporters.
Last year the military fire killed, Bassem Abu Rahma, a local activist in Bil’in during the weekly actions. The army stepped up its campaign to target local activists who organize the weekly protest and arrest six of them during raids like today’s one.
Posted by sysiphus at 02:03