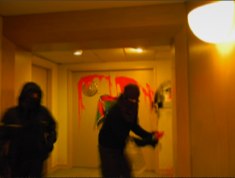 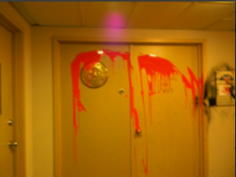 Mapuche Solidarity Vancouver
September 23rd, 2010 - Early in the afternoon on September 23rd a small group of us here in Vancouver, Coast Salish Territory, responded to the call-out for international solidarity with the 34 Mapuche weichafes (warriors) in prison in Chile, who have been on hunger strike since July 12th and also with the 14 anarchist revolutionaries who have been in prison since the August 14th raids on squats and social centers in Santiago.
We taped the Mapuche flag and dumped red paint on the front door of the Chilean consulate’s offices which is located on the 16th floor on 1185 West Georgia Street in Vancouver.
The Mapuche and anarchist comrades give us much inspiration in their determined struggle against the government and corporations of Chile. We hope that this small act reach the hearts of the resistance fighters and contribute to their will to persevere.
This struggle is international!
We are with you.
Marichiweu (ten times we will win).
Coast Salish Territories(Vancouver, Canada)
Posted by sysiphus at 14:58