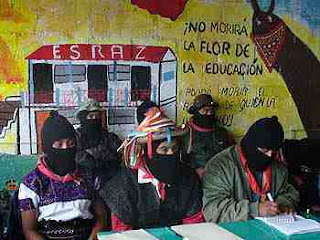 upsidedownworld
Members of the Mexican political parties PRI, PRD and PVEM (the green party) attacked 170 Zapatista supporters and expelled them from their homes in the Tzeltal community of San Marcos Avilés, in the municipality of Chilón, Chiapas, in retaliation for the construction of an autonomous school in the early morning hours of Sept. 9.
The Zapatista Good Government Junta (JBG) based in Oventik, denounced the attack, which was led by Lorenzo Ruiz Gómez and Vicente Ruiz López, and said the attackers were armed with guns, machetes and sticks, and broke into two houses where they tried to sexually assault two women. So as not to respond with violence to these acts of severe provocation, the Zapatista men, women, children and old people left their homes and belongings and fled to the mountain "where they suffer hunger, cold, sleeplessness and fear."
Zapatistas from Pamalá, in the municipality of Sitalá, had previously informed the JBG that, at the end of August, a compa from their community, Manuel Vázquez, had been forcibly ordered by the authorities and leaders of the political parties in San Marcos and Pamalá to dismantle the autonomous school. The authorities told him that they were then going to attack other communities which had autonomous schools. The JBG stated that "the purpose of these attacks is to prevent the education of our children and to stop the progress of construction of our autonomy."
Manuel Vázquez was thrown into prison on the 21st August, where he was threatened, harassed and intimidated in an attempt to force him to abandon the project of autonomous education. When Pedro Cruz Gómez came from another nearby community to try to help Manuel Vázquez, he was also imprisoned. A knife was planted in his trousers in an attempt to accuse him of intention to murder. When the prisoners were freed, they were told to abandon the Zapatista organisation and to leave the lands they had bought ten years ago. Threats were made to cancel the land rights of fifteen families.
On the August 24 and 25 the aggressors seized 29 hectares of land with 5,850 coffee trees, 10 hectares of maize, along with beans, cattle, horses and three houses, and destroyed a banana plantation. On the 8th September, they took cattle, pulled down fences and fired shots into the air. They threatened to "take the land next, and to evict the men, kidnap the women and children, and burn the houses".
Posted by sysiphus at 05:52