Stockholm - Riots for two days in the Rinkeby suburb 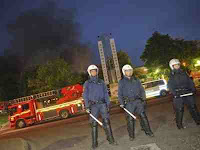 AFP
Up to 100 youths rioted for two straight nights in a heavily immigrant suburb of Stockholm, throwing bricks, setting fires and attacking the local police station, police say.
"They set fire to a school building ... They tried to set fire to the police station and other buildings and vehicles, but mostly they have thrown rocks and bricks at police and firefighters," police spokesman Mats Eriksson told AFP on Wednesday.
He said no one had so far been injured in the riots in the Rinkeby suburb, known for having one of the highest concentrations of first- and second-generation immigrants in Sweden.
The riots began late on Monday.
"The whole thing started when a group of young adults were not permitted to enter a junior high school dance. They got angry and started throwing rocks through the school windows," Eriksson said.
Up to 100 people went on a rampage, breaking 23 windows at the local police station and setting at least one car ablaze.
Three people were arrested late on Monday, but had since been released, Eriksson said, adding that "I would say things got worse" on Tuesday night, when a school and four or five cars were set on fire.
"Firefighters were there but they couldn't approach the blaze (at the school building, which was basically burned to the ground), because they were under attack," he said.
Posted by sysiphus at 15:40