Dozens of striking workers hurt in clashes with police in China 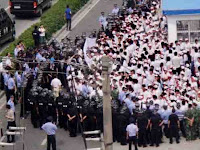 BEIJING — Dozens of striking workers have been hurt in clashes with police in China as a fresh labour stoppage again halted Honda’s production Wednesday, in the latest unrest to rock the « workshop of the world ».
The latest labour action, which came after a spate of suicides at Taiwanese high-tech firm Foxconn, again drew attention to what activists say are the difficult conditions and low pay faced by millions of Chinese factory workers.
The clashes on Monday at a Taiwan-funded rubber factory in the eastern province of Jiangsu marked the first time in recent days that disputes over salaries erupted in violence, with state media saying 50 workers were hurt.
Some 2,000 workers at the KOK Machinery factory in the city of Kunshan outside Shanghai walked off the assembly line, demanding better pay and an improved working environment, the China Daily reported.
The injuries occurred when security forces tried to prevent the workers from taking their strike into the streets, the report said.
Photos of the incident showed police and special security forces massed outside the gates of the facility, preventing workers from exiting.
The paper said 50 workers were injured, five of them seriously.
Officials at the factory refused to comment on the strike when contacted by AFP on Wednesday, but said that the workers had returned to work.
« The police beat us indiscriminately. They kicked and stomped on everybody, no matter whether they were male or female, » one female worker told the South China Morning Post, which said at least 30 people were arrested.
Workers were asking for hardship pay to compensate them for working in high temperatures, full workers’ insurance, housing subsidies and a change to make work on Saturdays voluntary, according to postings seen in Chinese chatrooms.
Some of those postings were later deleted.
« We have to work in temperatures of 40 to 50 degrees Celsius (104 to 122 degrees Fahrenheit). They refuse to do anything about the heat, » one worker told the Hong Kong-based Post.
« The smell from the rubber is unbearable, but we don’t even get a toxic fumes subsidy. »
Foxconn — which counts Apple, Sony and Hewlett-Packard among its clients — has agreed to a 67 percent pay hike for its hundreds of thousands of workers in China after 11 of them committed suicide, 10 in the southern city of Shenzhen.
Its parent company Hon Hai Precision Industry lost more than three billion US dollars in market value in two days this week as investors fretted over the pay increases.
Japan’s number two automaker Honda Motor is reeling from more than a week of work stoppages in China — first at its parts unit in Foshan, and then at an exhaust parts maker owned by a subsidiary — that have disrupted production.
The first strike was resolved when Honda agreed to a 24 percent pay rise.
The second, at a joint venture factory in Foshan of Honda subsidiary Yutaka Giken and a Taiwanese firm, was ongoing Wednesday, forcing Honda to close two of its China assembly plants run by Guangqi Honda.
Posted by sysiphus at 05:24