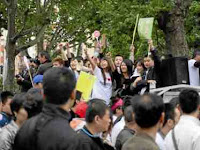 On Sunday June 20 the largest demonstration ever of Chinese people in France took place, 8,500 people according to some estimates, for which 5,000 tee-shirts and stickers saying 'Security for everybody' had been distributed by the organisers. Some anarchists happened to pass by, here is what they have to say...
translated from cette semaine
Anarchist database, Sunday, June 20, 2010
Coming back from a not very country walk, we went into the Belleville quartier in Paris. Hours earlier, a demonstration had started to denounce, in the words of the organizers: "The chronic abuse suffered by the Chinese community". The reason: Bags snatched, assault, etc. A demonstration with quite reactionary overtones, as evidenced by the slogans shouted and inscribed on the banners and placards: "Safety for Everyone", "Long live citizenship", "stop crime", French flags, Chinese and European anthems. It is not clear what violence they are talking about (having been more accustomed to the phenomena of violence within the community which will be discussed later), but we will understand later what was behind this event.
After the official end of the demonstration, the atmosphere is very hot there, people are flocking, trucks of cops arrive en masse. On all sides we hear the sound of fighting, then a torrent of violence is unleashed on the cops attacked in a melee by hundreds of unarmed people, they throw eggs, stones and glass bottles. Cars are overturned, CRS [anti-riot cops] are charged and are forced to retreat. Faced with this explosion of anti-cop violence, we almost enter the dance, but wait, out of "ethical prudence".
All of a sudden people start running. We believe that everyone is fleeing yet another load of cops, but we realize very quickly that it is something else. Demonstrators are chasing kids, that they are calling "blacks and Arabs", by throwing glass bottles. One of the kids falls down, and tries to hide under the porch of a doorway. Running to their side, we have to calm the fury of the lynch mob. They let go this time. We understand, listening to conversations: that "the cops don't do their job, leaving thieves at large, the protesters have decided to take matters in hand and avenge themselves." We also understand that everything started from the theft of the handbag of a demonstrator by a kid in the neighborhood, then the attempt by protesters to deliver the kid to the cops, who did not want him. It is from here that the demonstrators unchained their violence against the cops. Unrestrained violence, such as one was not used to seeing. Violence to punish the cops for not doing their job well enough.
The cops decide to retreat, flooding the place under a thick cloud of teargas fired into the crowd. More than fifty cop vehicles disappear in the blink of an eye, just as the violence was beginning to reach a peak. Clearly, the cops decided to abandon the place to let the inter-community violence unfold, while an hour earlier it was against the cops that everyone was insisting. This then led to a ballet between three to four hundred members of the Chinese community and some black and Arab kids, sometimes beaten to the ground by dozens of people and accused in a rush of being thieves, in front of thirsty journacops having smelt the smell of blood and large-titles, good scavengers that they are. But at the time of writing, nothing definite has yet emerged in the media about what really happened. We have seen some sort of makeshift militias, bringing together over a hundred Asians, to the neighbouring estate to beat up black and Arab people in a man-hunt reminiscent of the pogroms.
During the riots, we felt in Chinese rioters a fierce hatred against the "thieves". For example, after an unmarked police car was overturned, and its lights broken off, people began searching the trunk, immediately taken to task and being lynched, accused of being thieves by the very people who had upturned car. Suffice it to say that we didn't understand anything at this point.
This hot afternoon, and the events that marked it, seem to foreshadow a civil war scenario that is developing here and there, in these times of "crisis". The attitude of the police reinforces this impression, they left the scene when they felt the anger against them was being replaced with ethnic hatred between people. We can imagine that for the prefect a good racist riot is preferable to a riot directed against the cops and other State symbols and capital (banks and McDonald's are intact). Basically what need is there for a police presence in a riot against "offenders"? Note that every week, Chinese people are round up in dozens by the cops, to general indifference, without a single demonstration being called. Similarly, we never hear any of protest against the exploitation of Chinese people by other Chinese. That violence there, exploitation, is never denounced. Powerless and sad in the face of this shameful spectacle, we still want to express some clear positions.
This day showed that not all riots are good, despite what some a few hooligans and nihilists still believe, by their advocacy of civil war.
In addition, we believe it is necessary to abandon the war between the poor, between ethnic groups and between all imagined communities, between all equally imaginary social roles "honest Chinese workers" against "Arab thieves".
The social war is not war of all against all, but the war of who has always opposed power over all those who are against it.
Again and again, we will have to fight against nationalist, ethnic, communal, religious and political cancers.
Anarchists.
Posted by sysiphus at 13:43