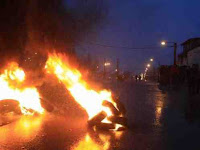 Violent clashes between police and protesters left a toll of the death of a man of 29 years and one serious injury. It was when residents attacked a police station after the death of a 15 years old at the hands of a policeman.
The cold evening in San Carlos de Bariloche was shaken by violent riots that left one person dead and several arrests. It all started around 16 hours when a group of about 150 people, mostly teenagers, shouted "justice" for the death of a young man of 15 who died after being shot at while being chased by police. The alleged victim of trigger-happy Bonefoi was named Dario. The tension during the demonstration was to increase until the riots started. Black River Police fired teargas and rubber bullets against the crowd, while the group of protesters set fire to one vehicle that was parked outside a supermarket. Injured in the scuffle a 29 year old man, surnamed Cardenas, who died just after 18 hours at a local hospital. In addition, eight policemen were wounded, including the chief superintendent of Station 28.
Judge Martin Lozada, called for the alleged abuse by police, came to the home the first of the victims where the wake was taking place the boy and the family of the victim severely rebuked him. "I do not mind that guy has a criminal record, I care who killed him. It's a shame this happens, the police can not control a situation with teenagers," said a neighbor in the very face of the judge. At that time the mayor came to the scene but, in the face strong public questioning, had to retreat quickly.
Meanwhile, the father of Bonefoi called on people to stop what it called "a war." "Please, let's stop the violence, let us watch over the body of my son in peace," he said.
The riots began around near the Escuela 278, San Carlos de Bariloche Five districts were affected by the riots and rioters torched a car parked outside a supermarket.
City residents say there have been no similar acts of violence in the city Rio Negro.
Posted by sysiphus at 03:50