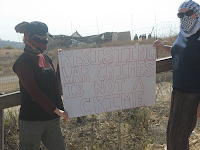 30 June 2010 - The jury in the trial of seven activists who decommissioned a Brighton arms factory to prevent Israel war crimes in Gaza in January 2009, have found [five of] them not guilty of Conspiracy to Cause Criminal Damage by unanimous verdict in Hove Crown Court.
Simon Levin, Tom Woodhead, Ornella Saibene, Bob Nicholls, Harvey Tadman have all been acquitted. Two others Elijah Smith and and Christorpher Osmond await a verdict.
The court sits again on Friday where the last two verdicts are expected to be announced. A press conference will be announced on Friday when the final two verdicts are expected.
Posted by sysiphus at 09:37