London - In the name of the (land)lord 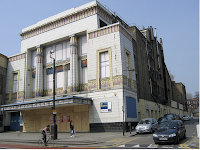 from indymedia london Sunday 30 May 2010
Church Violently Evicts Squatters From Cinema
On Saturday the 29th of May, at 5am around 40 church congregation members broke into the old Carlton Cinema on Essex Road, where a group of around 10 squatters were living. The cinema is owned by Resurrection Manifestation, an evangelical church currently based in Enfield. The church members, some with their own weapons such as hammers and others picking up anything they could find on the floor woke the occupants up screaming "leave now!" One man was woken up by a strip light being smashed in his face. Another man got glass in his eye from a church member affronting him with a broken bottle. "They sprayed fire extinguishers in our faces and grabbed us by our clothes and threw us around," said one person living in the cinema.
One churchgoer in particular was very aggressive and clearly charged for a fight, shouting 'out now!' and breaking windows. Other congregation members kicked in tents where people were sleeping and said things like "what you're doing is wrong." This seemed a little ironic when they were throwing homeless people onto the street.
The church has plans to make the cinema into a church as well as a seven-storey block of 44 flats and a new 520-seat basement-banqueting hall. Is this the kind of community we want in Islington? One that uses crazed violence in the name of the lord. ‘If there had been more of us we would have refused to leave the building and resisted.’ Said an occupant, ‘But because there were only 7 of us in at the time we feared for our safety. We are still unsure how they got in.’
Posted by sysiphus at 15:07