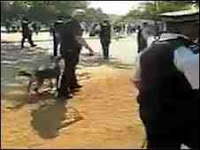 London, June 5 (ANI)
Three persons were arrested after a mass water fight in London’s Hyde Park, one of the city’s biggest parks.
...the water fight led to the nearby retail district being closed. Over 1500 people took part in the event on Friday afternoon.
It was believed to have been organized through social networking sites and saw the temporary closure of London’s main shopping district and the usually busy Oxford Street.
Police only managed to control the crowd after about eight hours when participants were finally dispersed.
Scotland Yard said that two male participants were arrested for public order offences, while a third detained on suspicion of causing grevious bodily harm.
The fight eventually ended at about 9 p.m. (ANI)
Posted by sysiphus at 10:29