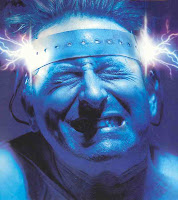 Psychiatry makes recourse to more and more terrible means to take away the freedom of those whom it considers deviant according to its biased vision of ‘normality’.
On May 28 2010, in a lively town in the province of Ferrara, where a reactionary rightwing mayor has just been elected, a 34-year-old man was subjected to the hideous activity of psychiatric doctors and of their best mates in uniform (police and carabinieri).
All started when police was alerted that a man had entered a church and started swearing during mass. Eventually the man went outside a bar, where he exhibited martial arts postures. This is what the local press reported, depicting the man as ‘a public danger, someone to be scared of’.
A couple of cops arrived at the bar to inform the man that he had to be submitted to a TSO (compulsory psychiatric treatment), which had been authorized by his GP and by the mayor that same morning. The man had already gone through a TSO in the past and had lost his job as beach-attendant for this reason. As he still had a vivid memory of the suffering endured during his experience at the hands of psychiatrists, he reacted angrily and started hitting the cops, causing a jaw injury to a female officer. The cops tried to immobilise him with pepper spray but the man managed to escape and reach his house, where he barricaded himself for about 25 hours. The forces of order set up a siege around the house and the adjacent streets, with a massive deployment of military, fire brigade and Red Cross operators (all this because the man had entered a church swearing and had exhibited some karate postures outside a bar!). Water, gas and electricity supplies were cut off during the entire period of the siege.
When he realized that the man was about to surrender, the local carabinieri chief gave his special units the order to storm the house by smashing the door and by making use of tear gas. The man was then immobilised, sedated, arrested and taken to a psychiatric institute, where he was administered psychotropic drugs and kept under strict surveillance for a few days, until a judge confirmed his arrest in the same psychiatric institute.
As oriental swords were found in the man’s house because of his passion for martial arts, the judge might charge him with ‘dangerous antisocial behaviour’, which will lead to him being locked up in a judicial psychiatric hospital. Moreover, the man was charged with assaulting the female police officer as he tried to escape arrest. Needless to say, no mention was made of the injuries inflicted on him by the cops when they stormed his house.
Various journalists in the service of power have wondered, through their disgusting newspapers, why the man reacted so violently when faced with the possibility of compulsory sanitary treatment. We would like to remind them why.
Compulsory sanitary treatment (or TSO) is a perverse mechanism, which denies ‘patients’ any chance to refuse it. It is a unique case in the field of that science called medicine, where any kind of treatment should be administered with the patient’s consent and interrupted whenever the latter decides to do so. Such possibility is not valid for that pseudo-science called psychiatry, whose aim is not the well-being of ‘patients’ (imaginary patients) but the classification of behaviour and thoughts considered abnormal, bizarre, strange or simply odd. Hence the invention of a series of mental diseases, which have never been demonstrated, and which serve only to justify the intrusion of psychiatric prejudice in the individual sphere of people.
In other words, when psychiatrists consider you ‘unable to understand and decide’ they abrogate the right to harm you… for your own well-being of course.
It is sufficient to visit any psychiatric structure whatever, be it a hospital ward or other kinds of institutes, to get an idea of the ‘cure’ as intended by psychiatry: straitjackets, psychotropic drugs that turn people into zombies, injections of drugs whose effect can last for an entire month without the possibility to interrupt it because of unpleasant side effects, rigid timetables, aseptic rooms where you can do absolutely nothing, at times total reclusion and at other times a few hours outside the room under the escort of white uniformed staff. The places of psychiatry are alienating and only serve to lock people up, the cure being only a pretext.
That’s why we are against psychiatry and are on the side of all those who try to defend themselves from it at all costs.
That’s why we are against journalists and the shit they write where they present a man swearing in a church as a danger for the community, someone to be scared of, someone to be promptly sedated in order to restore a pacific life of passive obedience to the judicial and moral laws of dominion.
That’s why we are against the State and against all governments, which in Italy have been considering for years the possibility to reform psychiatric departments by conceding their management to the private sector and by reintroducing practices such as electroshock (which is still being used in some institutes).
Psychiatry cannot be reformed. It must be destroyed from its base, i.e. this whole society where one day anyone that jumps on to a crane or goes up on to the roof of a factory after being dismissed will be labelled mad, as will anyone who protests at the social injustice produced by this economic system, which will continue to rain the consequences of its crises upon those who are inexorably exploited.
Anarchists from Ferrara
Posted by sysiphus at 03:20