Trento, Italy - Antiwar blitz at the Faculty of Sociology of Trento 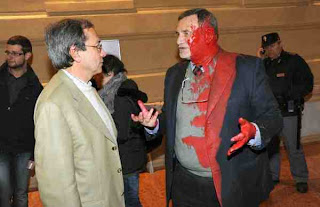 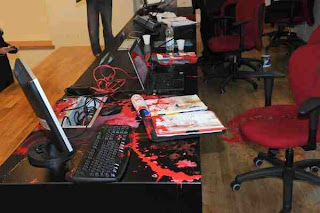 informa-azione /culmine
Antiwar blitz at the Faculty of Sociology of Trento, where a conference was being held on peace missions in the presence of two officers of the Carabinieri in Rome: no one was hurt, as it seemed at first, but one person was arrested after a scuffle.
A group of five hooded young people entered the college throwing red paint and smoke bombs against the speakers at what was taking place in the Kessler lecture theatre. To be smeared with paint were the speakers of the meeting, organized by the European association Elsa: Professor Roberto Toniatti, professor of the Faculty of Law of the Trentino faculty and two officers of the police. The same Toniatti was then taken to the hospital, along with captain Pierpaolo Sinconi of the general command of the Carabinieri in Rome for controls.
Precisely one of two officers who were at the speakers' table, Giuseppe Zirone, was the first to react and managed to block one of the assailants, while the others fled, shouting "murderers" at the speakers. The arrested is a young Roveretan, whose name has not yet been disclosed.
In the Kessler hall a note was thrown against one of the military officers invited to the conference: "Murderer, you are one of those directly responsible for the war," it said in the flyer. The assault was led by five young men, one of whom was then stopped thanks to the closed circuit television surveillance of the University of Trento and the readiness of the same Zirone that stopped him. Police and carabinieri arrived on the spot. (press of Trentino, 28.10.10)
A little paint against these murderers is the least we can do...
October 28, at the Sociology faculty, a conference was being conducted on security and the role of Italy in "peacekeeping missions", that is in the twenty-one theatres of war in which - from the Middle East to Africa - Italian troops are currently engaged.
The meeting was attended by law professors and some army officers.
The presence of lawyers and leaders of the armed forces was not random. Since 1991, the Italian government has been constantly engaged in military operations despite the provision in the constitution prohibiting it: is there some lawyer who can resolve this contradiction of the State? At Sociology professionals of war were discussing with university professors on how to better serve Italian imperialism ...
In the general silence, a group of antimilitarists challenged the conference throwing smoke bombs and red paint against the speakers and leaving leaflets in which the military were called what they are "killers."
One of our friends and comrades has been arrested: he is now in prison in Bolzano. We offer him our solidarity.
War needs a wide complicity of weapons factories, military bases, research centres (also universities, including Povo), lies in the mass media, conferences of propaganda.
We do not want to be complicit with the massacres of democracy. That's all.
We will not leave those who live in war in peace.
Luca free!
Troops out of Afghanistan!
Prevented the construction of the Matarello military base!
No to the opening of Finmeccanica centre (The biggest Italian manufacturer of weapons) former tobacco factory in Rovereto!
Anarchists
Posted by sysiphus at 19:24