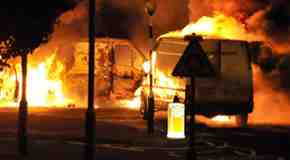 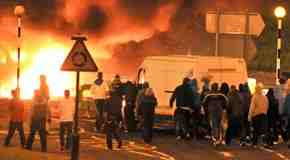 belfasttelegraph
Tuesday, 26 October 2010 - A bus was set alight as serious disorder broke out on the streets of Newtownabbey last night.
A car was also hijacked as a mob of around 100 people gathered close to the O’Neill Road area of the town. Three other vehicles were later seized nearby.
Police went to the scene, where they attempted to restore order. Youths threw stones at the approaching police vehicles.
Motorists were warned to stay away from the area while officers dealt with the trouble. Road closures were eventually removed shortly after midnight.
It is the latest outbreak of trouble in east Antrim following serious disorder in Carrickfergus and Ballyclare two weeks ago.
..the trouble may be linked to police activity in the area earlier this month.
Two weeks ago, loyalist paramilitaries orchestrated a night of violence in the area which left two officers injured. A female officer was hurt in Carrickfergus when her vehicle was attacked by a gang of up to 25 men wielding bats.
There was also trouble in Eden where youths blocked the road.
Posted by sysiphus at 22:46