Jerusalem - the new intifada is composed of boys of ten years 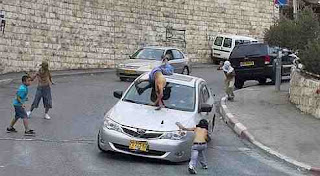 For several months, incidents are increasing in Silwan that don't just involve adults or teenagers, but children. Often as young as ten years, these urchins stone vehicles in the steep streets of the neighbourhood. This guerrilla child of a new kind poses a unique problem to the Israeli police.
This intifada of children takes place in one of the most volatile sectors of East Jerusalem.
Silwan is a narrow gorge, wedged between the walls of the Old City and the Mount of Olives. In this jumble of houses clinging to the slopes of the valley, every day 60,000 Palestinians face a few hundred Israeli settlers holed up in buildings they occupy in the middle of the neighbourhood. The Elad settler organization, headed by David Beeri, conducts highly political searches to exhume the remains of the Jerusalem of David, and an active policy of colonization of Palestinian homes by acquiring them and installing Jewish families. The clashes between Palestinian residents and the security guards who protect these settlers regularly result in injuries, sometimes even death, as earlier this month. The Elad project, supported by the Jerusalem Municipality, aims to extend the tourist site of the City of David by transforming the bottom of the valley into an archaeological park, destroying Palestinian homes.
"We are inhabitants of Jerusalem, we pay our taxes, but the municipality does not deal with us," said one Palestinian father. "Our money is used for the settlers, who have all the utilities, garbage collection, all water-borne sewerage. We, we have nothing, "he says. "Our children have nowhere to go, they'll play football in the bottom of the valley, and there's an incident. I cannot keep my son home. "
The children have taken over from fathers and older brothers. Without leaders or political agenda, the intifada is a game for them, more dangerous than others.
According to Palestinian residents of Silwan, the police come almost every night to visit houses. They break down the door and arrest children. "I remain fully dressed each night to be ready in case they come," continued the father of Iyad. "I've been arrested, when I was 17. I was terrified. But these little ones are not like us, they are not afraid. " "They act on their own. No father would send a small child to throw stones. They come home from school, face the police, and that's it. "
Posted by sysiphus at 01:15