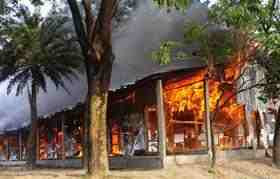 reuters
Sat Oct 23, 2010, DHAKA (Reuters) – Bangladeshi police used rubber bullets and teargas Saturday to disperse thousands of people protesting against plans to acquire land for army housing, officials and witnesses said.
Private television channels said at least 50 people were injured in the clashes near Dhaka.
Police said at least 60 troops were evacuated by helicopter after a crowd, some carrying sticks and machetes, attacked their camp at Rupganj, about 16 km (10 miles) east of the capital.
Protesters set fire to two army vehicles and damaged several others, and ransacked an army field office, according to witnesses.
Four helicopters made several sorties to evacuate the troops from the camp. Dozens of others were evacuated by river boat, they said.
"We have evacuated the troops to avoid confrontations with the public,;" a Defense Ministry official said.
The violence erupted after police used batons to try to clear a street of demonstrators protesting against the planned acquisition of about 1,000 acres of land for a housing project for members of the army.
Residents complained that they had been offered inadequate compensation.
Posted by sysiphus at 00:57