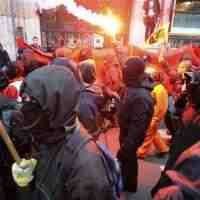 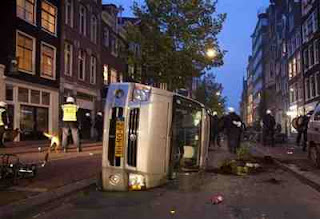 AMSTERDAM – More than 100 people protesting the outlawing of squatting at unused buildings in the Netherlands clashed with police in Amsterdam's historic center late Friday, throwing stones, setting fires and erecting barricades.
Police said early Saturday that 11 protestors were arrested, and two police, three police horses and an unknown number of demonstrators suffered minor injuries. Local television station AT5 broadcast footage of police with betons battling squatters in narrow streets and allies, with the protestors throwing rocks and setting off fireworks.
AT5 published a photo of one young woman with a mohawk haircut being escorted away by a police officer while bleeding from a head wound.
Squatting is the latest pillar of the country's liberal institutions — such as legal prostitution and cafes that openly sell marijuana — to be abolished or curtailed as the Dutch become more conservative and rethink the boundaries of their famed tolerance.
In Amsterdam, the epicenter of the movement known in Dutch as "kraken," or "breaking," several hundred squatters had demonstrated peacefully during the day against the new law that makes their way of life punishable by up to one year in prison.
By nightfall, some began throwing rocks at police and overturning cars. Police attempted to disperse large groups on two streets by carrying out charges.
By mid-evening an A P eyewitness saw squatters using metal fences and piles of bicycles to block one of the city's bridges amid a haze of tear gas. An AP photographer saw police using bulldozers and water cannons in an attempt to clear the streets lining the city's ancient canals of such barricades and to quench fires set in piles of rubbish.
"Of course we're going to resist: resisting is part of what we do," said a young English-speaking woman at a "squat," or occupied building, next to the Amstel River, ahead of Friday's protest. She identified herself only as Lilo.
Most squatters decline to give their full names both for philosophical reasons and to avoid trouble with police or immigration authorities.
A study published this year by Amsterdam's Free University estimated the number of squatters at roughly 1,500 in the Dutch capital, a city of 750,000. Amsterdam Mayor Eberhard van der Laan says he plans to gradually empty the city's remaining 200 squats.
Posted by sysiphus at 11:38