Santiago, Chile - Office of the Gendarmerie in Ñuñoa attacked with petrol bombs 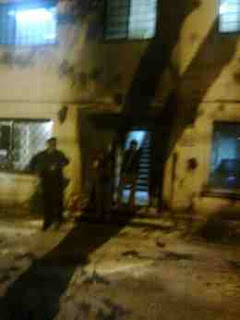 Santiago - A petrol bomb attack took place on an office of the Gendarmerie (which has the function of prison guards in Chile) in the municipality of Ñuñoa, Metropolitan Region, at the intersection of Macul and Grecia, in front of the Universidad Metropolitana de Ciencias de la Educación (UMCE, Former teaching college).
According to preliminary information from the police, a group of about 20 youths tried to set fire to barricades in the street, while one of them launched several Molotov cocktails at the building.
The office is a centre for social rehabilitation of the eastern area of the capital, where people go to sign on when subject to restrictive measures, such as parole.
At the time of the attack there was only one guard on the spot. The Carabineros and anti-riot squad were called to enhance security of the place.
Leaflets were found supporting the cause of the Mapuche and those arrested for the "Caso Bombas."
Posted by sysiphus at 10:58