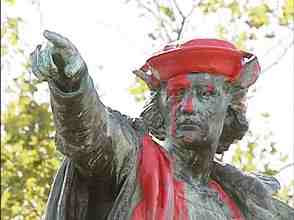 signalfire
October 11, 2010 - Portions of a statue of Christopher Columbus in Providence were covered in red paint, police said.
The statue stands at the fork at Elmwood and Reservoir Avenues.
A sign that read “murderer” was also put around the statue’s waist.
Police received a call about the statue early Monday morning.
Police said they are investigating the case as a crime of vandalism. They said they don’t have any suspects.
Before the statue was cleaned later Monday, the vandalism drew the attention of drivers passing by. It also garnered strong reaction from people who live nearby.
“I don’t think it’s proper to deface city property. They should have stood here and handed out pamphlets on the true history of Columbus,” said Barry O’Connor of Providence.
The statue is a sign of the controversy that surrounded Columbus and his place in our nation’s history. But even those people, who said they feel he’s a figure who should not be celebrated, didn’t agree with what was done.
“I think that’s disrespectful. I don’t agree that should be like that. But on the other hand, it does make this conversation possible. So I can’t say it’s totally wrong,” said Francisco Gonzalez of Providence.
But others said it is wrong and believe it sets a bad example, especially for the children who see it.
“Unfortunately they don’t take pride in the community. They have to vandalize something that’s history, and the kids made a comment so they wanted to talk to you and say what they felt,” said Brian Gomes of Providence.
Posted by sysiphus at 04:28