Lyon, France - Youths transform the genteel city of Lyon into a flashpoint of violence over pension reform 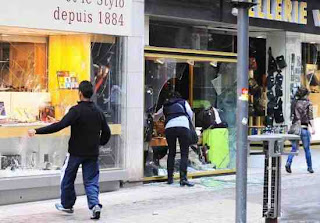 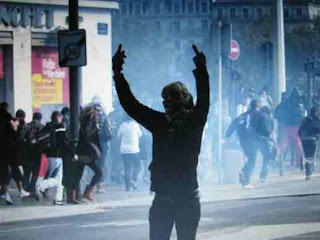 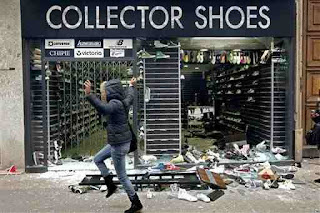 20/10/2010 - Youths who pillaged stores, torched cars and fought street battles with police have transformed the genteel French city of Lyon into a flashpoint of violence over an unpopular pension reform.
One of France's wealthiest cities and more commonly associated with fine-dining than riots, Lyon has seen the worst violence of this week's street protests as clashes injured two dozen people and scores more were arrested.
On Wednesday, police in the southeastern city tear-gassed about 300 youths in groups around the central Bellecour square after calling in 800 extra officers to put down what one local official called "urban guerrilla warfare."
Youths booed and insulted Interior Minister Brice Hortefeux who visited the city to back up police trying to contain the violence that first erupted last Thursday.
Disturbances in the Paris suburb of Nanterre have also marred otherwise peaceful street protests against President Nicolas Sarkozy's plan to raise the ages for minimum and full retirement to 62 and 67 respectively, something he says is vital to rein in a soaring pension shortfall.
"France does not belong to hooligans, to pillagers and hoodlums. It belongs to honest people who want to work peacefully," Hortefeux said in Lyon.
The flare-ups underscore France's long-simmering problem of city suburbs full of frustrated youths, many of them unemployed immigrants, who use demonstrations as a pretext to go on a rampage.
On Tuesday, some 75 people were arrested after stone-throwing rioters charged police, smashed shop windows with chairs from cafe terraces and burned scores of cars, prompting the local head of urban security, Albert Doutre, to describe the scenes as "a real case of urban guerrilla warfare."
Authorities in Lyon said they believed about half of those arrested this week are minors from the city's suburbs and many may not attend school.
The youngsters use text messages and the social networking website Facebook to organize their movements, a government official in Lyon told reporters on Tuesday.
Posted by sysiphus at 15:15