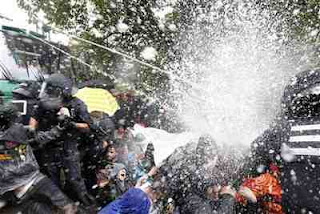 STUTTGART, Germany, Sept 30 (Reuters) - German police used water cannon on Thursday to disperse a crowd of more than 1,000 people protesting against plans to knock down the city's landmark train station.
The spectre of a prolonged standoff over the demolition, and its underground replacement, could hurt Chancellor Angela Merkel in upcoming regional elections.
The protests initially focussed on the "Stuttgart 21" railway station project but have turned into a larger show of discontent against the government. Merkel has said the project will be a decisive factor in regional elections next year.
The demonstrations could have an impact on Merkel's hold on power at a time when her centre-right coalition is already struggling in the opinion polls.
Her Christian Democrats (CDU) have ruled Baden-Wuerttemberg state since 1953 but face an uphill battle to hold on in a March 2011 election -- partly due to disenchantment over the station which the CDU backs.
For months, thousands of people have tried, sometimes violently, to stop the project in the southwestern city, which critics say wastes taxpayer money and is not needed.
Protesters scuffled with police, some of them mounted on horses, in the Schlossgarten area next to the station, where about 100 trees are due to be felled by February to make space for the 4.1 billion euro ($5.57 billion) building project -- one of Germany's largest.
Demonstrators have occupied five of the trees.
Police said they also used pepper spray against protesters trying to climb onto cars that they used to block off the area and that some protesters threw stones at them.
Posted by sysiphus at 11:31