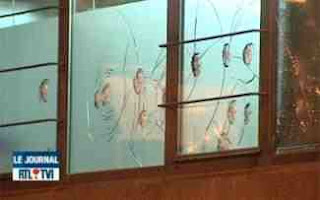 2 October 2010 - The Marolles police station in Brussels was vandalized on the sidelines of an unauthorized demonstration held near the Gare du Midi. Two policemen were injured: the five people who were put under arrest face up to ten years in prison. About 22 hours on Friday, the police station in the Rue de Hectolitre closed its doors . When the last police officer entered his car, fifty people started to storm the police station. "Dressed in black and wearing masks, carrying hatchets and hammers, they immediately threw stones at the police station. The inspector came out of his car, and received several stones in the back and head. He is unable to work for now. He took refuge in the police station, where he appealed to other inspectors who were still in the vicinity ", said Christian De Coninck, spokesman for the Brussels-Ixelles police.
The group then fled, but police were able to detain six persons. Among them was a minor who has been released on the orders of prosecutors in Namur. The other 5 are in their thirties and are under arrest. "What they are charged with for the time being is conspiracy because there was a coordinated group to attack the police. There is also assault and battery with intent against agents since the group arrived in an apparent attempt to do battle with the forces of order. There is also damage to property and vehicles were put out of use ", said the Deputy Public Prosecutor of the King of Namur, Sonia ISBI. A link to the event? Those arrested face up to 10 years in prison. The damage to the police is important: there are 66 hits on the windows of the building and cars were damaged. In addition, two policemen were wounded. Earlier in the evening, police had arrested 130 people administratively part in a demonstration near the Gare du Midi. This grouping had not been authorized, and it was to protest against the detention centres and the policy of deporting undocumented foreigners. Among those arrested, who were subsequently released, were 17 minors.
Posted by sysiphus at 01:18