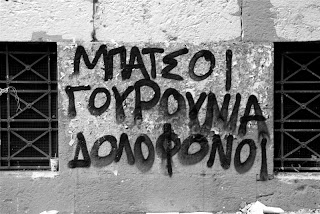 actforfreedomnow
History has, time and time again, shown us that people suffer from lack of memory. History repeats its self tragically and I am sure that history it self is sick of repeating. We stand by incapable of relieving it of its martyrdom .
Now more than ever, we must lift it from its miserable stagnancy. It is impossible to forget. We cannot forget. We have no right to forget. We have a duty to move here, there, anywhere but not return to our couches as mere viewers of the fate of the above-mentioned “lady” (history). We can show history round the world we trust. A world devoid of inequality. A world where our sweat will at last matter. A world where our life will not depend on meaningless conflict and negotiations nor of course depend on any sort of ostracism or any metaphysical phenomenon.
So, I am afraid we’ll forget and we’ll go back home to the warmth that freezes our conscience. I fear we’ll end up watching the news once again without our action in it. We‘ve started something which we have a duty to bring to a conclusion not to an end. It’s time to awaken history and even on crutches. Lead it under our banner to the country, so much talked-about, the country to which we suddenly got tickets for. Let’s make the journey and let’s leave our entire luggage behind. Let us create everything from a beginning whose thread will look stable and inelastic. What we need is within us. It would be pathetic to let it remain within. It would be to egoistical to digest it. It would be destructive not to share it.
Repeating doesn’t make it perfect, it destroys evolution. I entreat you then not to forget to go out in the streets. History has always slept in the streets anyway.
--------
As it has just been announced: Korkoneas, the murderer of Alexandros Grigoropoulos, has received a life sentence for the murder, plus 15 months for illegal weapon possession. His co-defendant and accomplice to the murder, Saraliotis, has received 10 years. Saraliotis has asked for his sentence to be suspended until the court of appeals; his demand is being considered now (14.30 GMT+2) by the court – this caused a reaction by Alexandros’ grandmother and the atmosphere in the courtroom is now tense.
Posted by sysiphus at 04:41