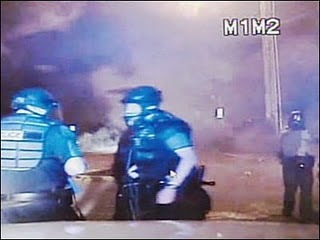 the vast minority
26 September 2010 - HUNDREDS of young people battled riot police in a university city in the north-west of the USA at the weekend.The clashes took place in Eugene, Oregon, which has a longstanding anarchist presence.
Police used tear gas against the youngsters, who had been out partying.
"Police say it's unclear what touched off a 400-strong riot in the college town of Eugene that led to nine arrests."No injuries were reported after people spilled out onto a residential street Friday night, throwing bottles at officers, breaking car windows and tearing down street signs in the town that's home to the University of Oregon.
Posted by sysiphus at 10:40