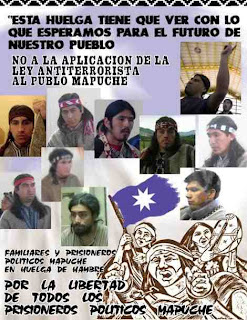 Radio Bio-Bio, 02:10:10 - The spokesman of the 9 Mapuche on hunger strike in Angol prison met with the Minister Larroulet Cristián to deliver their response to the government's agreement, not accepting it and announcing that the hunger strike remains in force. The Minister Larroulet said that the priority is people's lives and that they will insist that they stop with the hunger strike. However, there was no agreement reached with the 9 Mapuche who continue a hunger strike in Angol prison. The Mapuche spokesman said they were in a phase of reflection, so there are dates being set for new negotiations.
Update:
14 Mapuche political prisoners on hunger strike
from culmine, 5 October 2010
An update on the hunger strike by political prisoners Mapuche (PPM).
Following the agreement of October 1, Concepción, accepted by 24 MPP detained in the prisons of Concepción, Temuco and Lebu, some MPP decided to continue the struggle initiated on July 12, considering the conditions of the agreement to be insufficient. 14 MPPs have decided to continue with the hunger strike, to the end.
- 3 are still in the jail of Angol
- 7 from Angola prison are hospitalised in Victoria
- Three are being held in prison in Temuco, note that the three began the strike in September
- 1 in the juvenile prison of Chol Chol
They have already visited by the bishop of Temuco, although so far they do not have a MPP official mediator. To date there is no ongoing mediation and the health of the MPP is starting to give rise to concern.
Here is a list of the Mapuche Political Prisoners on hunger strike:
ANGOL prison:
1.- Víctor Llanquileo Pilquiman
2.- Fernando Millacheo Marin
3.- José Queipul Huaiquil
VICTORIA hospital:
4.- Víctor Hugo Queipul
5.- Felipe Huenchullan Cayul
6.- Camilo Tori Quiñinao
7.- Eduardo Osses Moreno
8.- Alex Curipan Levipan
9.- Carlos Huaiquillan Palacio
10.- *Waikilaf Cadin Calfunao
TEMUCO prison:
11.- Hugo Melinao
12.- Cristián Levinao
13.- Sergio Lican Levio
CHOL CHOL prison:
14.- Luis Marileo Carique
Posted by sysiphus at 01:47