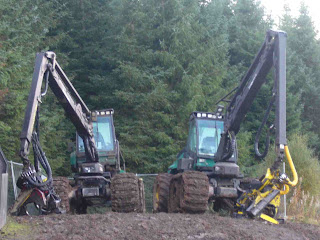 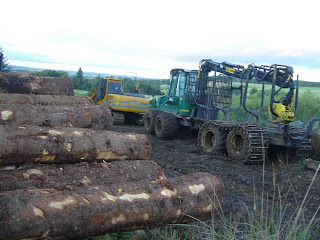 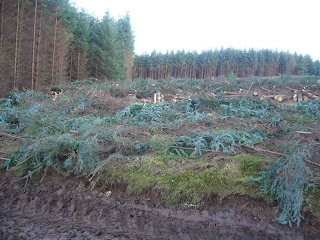 Mainshill Open Cast attacked with paint and locked shut (UK)
18 October 2010 - “In the early hours of Monday morning, to mark the first day of Scottish Coals consultation on its three new open cast mines in the Douglas Valley, people took action at the newest mine in the area, Mainshill.
The gate onto the A70 was d-locked shut, the Works Traffic sign was painted with Stop Coal Chaos! and the security building was paint bombed.”
Sabotage at Broken Cross Mine (UK)
17 October 2010 - “Last night four earth movers, two dump trucks and an explosives handling truck were sabotaged beyond use at Broken Cross Open Cast Mine in South Lanarkshire. The mine is one of three active mines in the Douglas valley owned by Scottish Coal. Scottish Coal is attempting to open three more open cast mines in the valley, totally engulfing the communties in mines and infrastructure, destroying their way of life and their health.
It’s time to stand up to these bullies and hit them where it hurts. We won’t stop until they leave the Douglas Valley, and leave the coal in the ground. Fuck Scottish Coal!”
Coal trucks locked out at Mainshill Open Cast Site (UK)
13 October 2010 - “This morning people locked the haulage gate of Mainshill Open Cast Site on the B7078 with a d-lock preventing coal trucks entering the site and transporting coal to the Ravenstruther Rail Head.
This action was taken in solidarity with The Happendon Wood Action Camp and the people living in the Douglas Valley who are facing an onslaught of coal mines from Scottish Coal. Our actions will not stop until Scottish Coal stops ripping apart the Douglas Valley for profit. “
Posted by sysiphus at 02:03