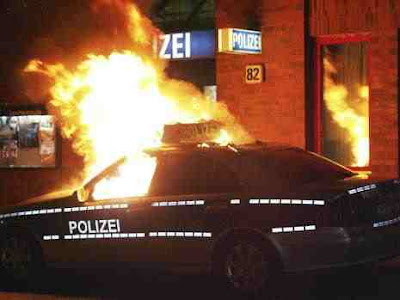 Police stations in Hamburg and Berlin were attacked on Wednesday night by persons unknown wearing masks.

In Hamburg police station windows were smashed and a police car set alight. Another had its windows smashed.

Molotov coktails and paint bombs were thrown a federal police office in Berlin.

The actions were claimed in this communique:
fonte: directactionde.blogspot.com

"December 6 one year ago, Alexis was struck down dead in Athens. To commemorate him and the revolts that followed, on December 4 2009 we attacked the police headquarters (BKA - Bundeskriminalamt) in Treptow - Berlin, with molotovs, stones and paint. The BKA is a key element at the helm of the collaboration of European security, whose objective is to destroy social struggles and is responsible for the sentence against Axel, Florian and Oliver as presumed members of militant groups (mg).
Our solidarity to all those who are starting to attack the dominion of power and capital who are pouring their rage into the streets and and fighting..
We mention only a few prisoners:
- Tobias, Rigo and Yunus, in the detention centre of Moabit Hakenfelde and
- Alfredo, Christos, Ilias, Giannis and presumed members of the militant group "Conspiracy of Cells of Fire" detained in Greece.

Freedom to everybody.
The action is also a response to the continual repression and liquidation of Brunnenstr. 183 to be clear - the price will continue to get higher.

Autonomous group Alexandros Grigoropoulos"
Sunday, 06/12/2009
(from informa-azione, translated from the Italian by Sysiphus)
Posted by sysiphus at 18:00