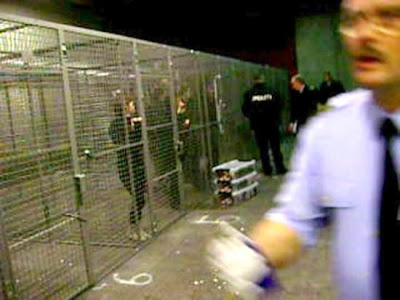 14.12.2009 23:55
For the second day in a row, the police have used pepperspray against the inmates in the climate prison in Valby. Climate activists smashed the cages and used benches to break cell doors open. The police are sending out daily press-releases with the latest news about the many arrests in connection with the protests against the COP15 summit, but some stories never go further than the policeâ€™s leadership and are left out of the official accounts.
This is what happened both on Saturday and Sunday where pepperspray was used against the inmates in the so-called â€™climate jailâ€™ in Valby. This happened in connection with a prisoner riot that involved several hundred arrested activists.
Modkraft has spoken to several climate activists who witnessed the riot.
"The atmosphere was totally crazy. Several hundred people were shouting and screaming at each other and many tore wooden benches loose inside the cages and began to hit the doors with them" says Mads who was among the people arrested after Sundayâ€™s â€™Hit the Productionâ€™ demo that took place on Sunday afternoon in Ã˜sterbro.
"You could see the fear in their eyes"
257 activists were "preventatively arrested" at Sundayâ€™s demonstration and were taken to the policeâ€™s main detention facility, commonly known as the climate jail, on Sunday afternoon.
Mads explains that the police used pepperspray several times against him and the others who sat confined in metal cages measuring 2.4 by 5 metres.
His story is is confirmed by two Swedish girls who Modkraft has also talked to. They say that there was a "chaotic atmosphere" in the prison on Sunday evening where they were also detained in metal cages after the demonstration at Ã˜sterbro.
"The police stormed the cages and took everything from us: blankets, water bottles and benches were all removed. They used a lot of pepperspray and it quickly spread around the room.", says Elli.
She tells us that a group of inmates managed to smash open the door of one of the cells. According to Ellie and her friend Marta it was that episode that unleashed the police action on Sunday evening.
"You could see the fear in their eyes. They were very aggressive, and they threatened to use more pepperspray. " says Marta.
As a reaction to the pepper-spray many inmates tore their bed-sheets in pieces and used them to cover their eyes. The two girls described the experience as "traumatic", "humiliating" and "deeply shocking".
"Many people were panicked and scared. It wasnâ€™t possible to get away." says Marta.

On the internet forum "Anarchist Debate Forum" a demonstrator called Holst who was also detained at Valby describes the events as follows:

"When I was arrested today, the benches that were tied to the walls with strips were pulled off and used as battering rams against the doors. People made so much noise by chanting and rubbing plastic bottles against the cell bars that the police had go around with hearing protection. Many of the doors that had been destroyed on Saturday had been replaced with thick wooden boards. The rights papers and bedding material were ripped into confetti.
"After some time riot police rushed into the cells to remove all of the benches, (the ones that had not been ripped off the walls were cut off) sleeping mats, and water bottles. They used pepper-spray to come into the cells.
"For the remaining hours, people had to sit on the concrete floor and were given water through the bars of the cells like hamsters."
There were also problems in the climate jail on Saturday evening after the police arrested 968 demonstrators on Amagerbrogade. DR described the situation with these words:

"Inside the prison some of the detainees have among other things, pulled down walls between their cells. Many of the benches from the cells have been removed and the remaining prisoners are now sitting on the floor.
During the disturbance, police officers took dogs into the hall but then decided to take them out again.
Correct link
15.12.2009 00:05