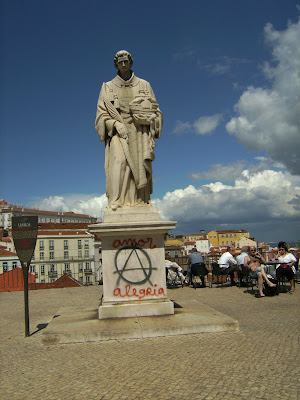 On the 25th of April 2007 happened in Lisbon an anti-authoritarian demo against fascism and capitalism. Close to 500 people took part on a march through one of the city’s richest areas, where paint was thrown at shops, banks and a riot cop van and slogans were spray painted on walls. To this shamelessness the guards of democratic order replied with a police charge and beatings against the demonstrators and everyone who were passing-by. As a result of this charge and of a few Hollywood-style chases throughout the city centre 11 individuals were arrested, charged among other things with insults and assaults on police officers. On the 7h of December 2009 the trial is due to begin, at the court Campus de Justiça de Lisboa.

We know that the real point is more than a few damaged windows and offended cops. It is the attempt to grab the totality of life and of using all the tools we want in the struggle against a social order that consumes and destroys individuals, our relationships and the world we inhabit. It is precisely because this democratic order can not tolerate all the beautiful and wild things and people that still exist that in the last few years we´ve seen and felt a growing criminalization in the media, and the persecution by the forces of repression, of many of our and others’ actions and daily activities.

In the struggle for the liberation of our lives, we know who our comrades are and who are our enemies, and we go on finding all the others with whom we can meet in the joy of revolt. The solidarity with the accused is not limited to that court nor to the dates set by others: it must spread and become part of a struggle that doesn’t have as a point of reference the steps taken by repression, but the steps that we in our own rebellion want to take.

Their attempt to stop us through fear, to isolate us or to make us change our discourse can only have as a result the merciless attack to a power that has no borders.

A few anarchists from Lisbon