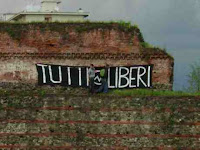 The Turin police are trying to force things against anyone that doesn't passively accept its movements. Following the recent failure of the digos [political police] failed to prevent the protest against Chief Prosecutor Caselli and prefect Padoin during the very glossy Book Fair today to day it is the fierce reaction to is a new demonstrative action of solidarity with those arrested on May 12. Although there were rumours at first that they would be released, the two comrades were arrested accused of resistance, violence and lesions
This after a group of people in solidarity in response to 'the attack on the freedom to self-manage oneself' on Wednesday morning went to the Palatine gates where they hung a banner with the words 'everybody free' they were immediately attacked by the forces of holy police present to safeguard the banner of god (the shroud). Attacked in force the two comrades were conducted in custody, one only after a series of beatings while two girls managed to escape but only after one had received a kick and the other her breasts twisted (prefect, don't put impotent cops on duty don't you see what they get up to?).
The others managed to escape after a long flight, we are waiting for more news.
Posted by sysiphus at 03:32