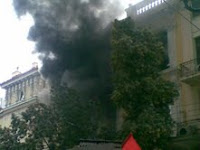 Three people are said to have been killed in Athens after protesters set fire to a bank during the general strike over the planned austerity measures.
The fire service said three bodies were found inside the Marfin Bank in Athens. Two other buildings are also on fire.
Petrol bombs were thrown at police who responded with pepper spray, tear gas and stun grenades.
Parliament is to vote on spending cuts and tax rises planned in return for a 110bn euro (£95bn) bail-out for Greece.
This will lead to wage freezes, pension cuts and tax rises.
Outside parliament, a group of protesters rushed up a flight of steps, taunting MPs to come out and calling them "thieves".
Riot police forced them back, but right next to parliament, others groups set buildings on fire - including a tax office.
Posted by sysiphus at 07:17