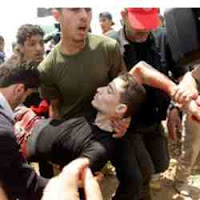 from Philippinetimes 1st May 2010
Palestinian youth, Ahmad Sliman Salem Dib, 19, died Wednesday after Israeli security forces shot him, in the morning, near the border fence with the Gaza Strip, while he was participating in a demonstration there.The incident was caught on video by Muhammad Sabah, a field researcher for Israeli human rights organization B’Tselem.The video shows a group of Palestinian and international activists walking in procession from the al-Shaja'iya neighborhood in the eastern Gaza Strip to the border fence with Israel.The youths, who were unarmed, reached a distance of a few dozen meters from the border, and stood facing an Israeli military post. The footage shows a soldier standing by the post. Some of the protestors threw stones at the post. A single shot is heard. Ahmad was shot and wounded. He was taken by ambulance to Shifaa Hospital in Gaza City, but died of his wounds later that day.
Posted by sysiphus at 12:19