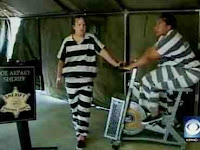 from imamook
Sheriff Joe Arpaio of Maricopa County AZ has introduced another new feature in what could be called “Innovations in Incarceration.” Arpaio’s latest is called “Pedal Vision.”
PHOENIX — Maricopa County Sheriff Joe Arpaio is implementing a new inmate program at Tent City Jail http://www.youtube.com/watch?v=_1tfIKUZ0fY called “Pedal Vision.”
The program uses inmate-powered cycles to generate electricity for televisions.
Reports say Arpaio’s recent visit to Tent City inspired the idea, when he saw that many of the inmates were overweight.
The stationary bikes are customized so that as an inmate pedals, a connected television is powered once the cycle generates 12 volts of electricity.
One hour of pedaling equals one hour of television viewing for the inmates, according to Arpaio.
Arpaio said the inmates will only be able to watch television in the television room if they choose to pedal.
Arpaio, long the target of bedwetting liberals, has been dubbed “The Toughest Sheriff in America” for his no-nonsense approach to law enforcement and incarceration. Some of his other innovations in incarceration include:
Arpaio set up a “Tent City” as an extension of the Maricopa County Jail – inmates live in tents in the Arizona desert. During the summer of 2003, when outside temperatures exceeded 110 °F (43 °C), which is higher than average, Arpaio said to complaining inmates, “It’s 120 degrees in Iraq and the soldiers are living in tents, have to wear full body armor, and they didn’t commit any crimes, so shut your mouths.”
Posted by sysiphus at 10:53