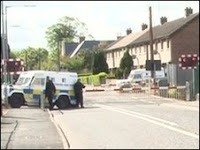 Police were attacked today with improvised grenades and petrol bombs as they responded to a security alert that temporarily shut down the main rail link between Belfast and Dublin.
A number of houses had to be evacuated in Lurgan, County Armagh, as army bomb disposal officers were sent to the Lake Street area, close to the Kilwilkie estate, in what turned out to be a hoax.
During the security operation, PSNI officers came under attack by a mob of around 30 people.
A PSNI spokesman said several officers had injuries to their hearing caused by the homemade grenades, one of which was thrown over the roof of a house on the estate.
The alert is the latest in a series of terrorist operations carried out by dissident republicans in North Armagh. The nationalist end of Lurgan is a stronghold for the Continuity IRA.
Posted by sysiphus at 08:13