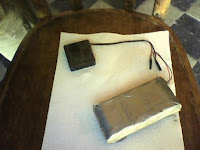 from informa-azione
May 17, under the van of an editor of Nunatak, we found a finde abbiamo trovato un bel transmitter with a SIM Vodaphone chip and 4 torch batteries, of 3,6 volts each, in series. All placed with a magnet behind a back wheel of the vehicle. This time, just not to boast, it should be said that it didn´t take much to notice that "someone" had placed a device to spy on our movements. Moreover, for some time now, unfortunately, it is as well to take into consideration forms of technological control that is increasingly invasive and capillary. In fact, among all the manoeuvres and repressive attacks that the State puts into effect against those who still have the courage to raise their heads, this is just the latest sign that the review Nunatak has become object of attention of who knows which Procurator or investigative body. Monitoring, home visits and a whole series of other more or less concealed pressures have been gravitating for some time around the review and whoever collaborates with it with the intention of burning the earth around it and preparing an eventual repressive intervention in the near future. It seems pointless to us to stree once again that their "attention" will not make us take one step back from our projects, but we can only admit that, for as long as uniforms and authority are concerned about our presence , of our way of thinking and acting, we have confirmation that we are moving in the right direction. Nunatak - magazine of history, culture, struggles of the mountain.
Posted by sysiphus at 07:28