Murder and riots in Warsaw 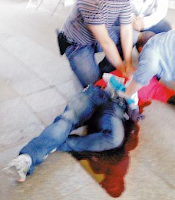 from actforfreedomnow
A 36-year-old Nigerian man was shot to death by a cop known to have violent, racist inclinations.
On Sunday May 23, police raided some Nigerian traders at the Stadium bazaar in the Praga district of Warsaw. One guy was apparently handcuffed and push to the ground. His 36-year-old colleague from Nigeria, Max, tried to intervene and get the police to stop brutalizing the other. Max was shot in the stomach and killed.
There immediately started to be problems with police, who tried then to chase and round up the rest of the panicked African traders, mostly from Nigeria. When more police arrived, some riot started. People were throwing stones and bricks at the police and 4 police vans were destroyed. 32 people were arrested. The police want to charge 25 of them for assault.
The police immediately sent their spokesperson to invent a good story for the media: that police were "surrounded and attacked" by a gang of agressive Africans, so they had to shoot Max. The official media version was racist and uncritical of the police.
We later heard from eye witnesses and are still getting more testimonies and evidence.
ZSP released a statement and called for an emergency action the next day. During the day, the TV interviewed Max's wife, Monika, and Akai from ZSP, finally letting another version of events into the media.
Max had been in Poland legally for many years. He was married to Monika, a Polish woman, with whom he has three children, aged 10, 4 and 2. He was selling goods at the stadium as a second job to supplement his poor income and help support his family.
In the evening, people gathered at the site of the murder. Some speeches were made and then there was a spontaneous demonstration to the police station were people are being held. The protestors took over the main street in Praga and marched to the station. There, a group of Max's friends came and told people about what happened.
25 of the 32 arrested will be charged with assaulting a police office, which faces up to 10 years in prison.
Posted by sysiphus at 07:25