Direct news from a comrade in Athens today 5'5 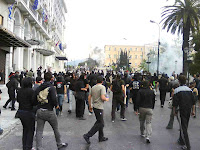 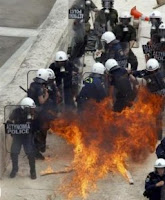 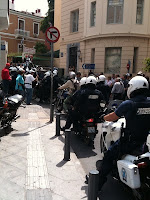 1) Police attack social spaces:More than 60 abducted to GADA police headquarters and at least 6 confirmed arrests up to now. Motorbike police gangs of Delta, Zeta and plain clothes cops holding a siege at the offices of the "anarchists for a polymorphic movement" and of the "cooks and waitreses' base union" at Exarchia. They invaded the "polymorphic" space, beating their way in, injuring heavily one girl and arresting many others. Also many cops are moving to Patision and Skaramanga str. squat. Some arrests and many beatings near the self managed park of Navarinou and on Tsamadou street, at Exarchia. There is also information they invaded "Diktyo" social rights network space at Tsamadou. Some people are still inside Polytechnic uni maintaining minor clashes with the cops. There are talk about a new march during the night, and many workers claimed another strike for tomorrow.Police checkpoints around the whole city center. The cops are playing nervous, threatening to use their guns.
2) Indeed, the three employees of Marfin bank are announced dead by the fire brigade service. Their boss (mr Vgenopoulos, owner of Olympic air and MIG business corporation) made them work on a strike day, locked in the upper floors of a seemingly empty bank building with no exit doors available nor fire extinguishers! The fire brigade issued a complaint to the police, for not letting them approach the building in time, but after some time the media say they changed their evaluation to the police cooperation as "good" and said it was the rioters that didn't let them approach instead.
Some more info: A Bazaar supermarket was expropriated during the riots and stuff were distributed to the people. One minister was dressed up as protestor with helmet to enter the parliament during the demonstrations! A mercedes was set on fire near the polytechnic university and many other luxurious cars during the riots near Syntagma square. Also a jewelery and few banks, and the offices were the state keeps the taxes record! If the back up are harmed or not found, many people's owing to the state will be virtually evaporated! The president of GSEE was once again kicked out of the marches...Now the despicable media say "when some people asked the rioters why are they burning a building with employees inside the rioters replied they deserve to burn because they re working for the bank" which is ofcourse yet another hideous lie. We weren't actually near the Marfin bank fire, but we were in front of another bank being burnt on Stadiou street a few minutes earlier, and again an employee let us know there are people inside, and right after that the people starting the fire helped put it out...This kind of manipulation is typical for our pathetic and incompetent bourgeois scum.
Posted by sysiphus at 13:29