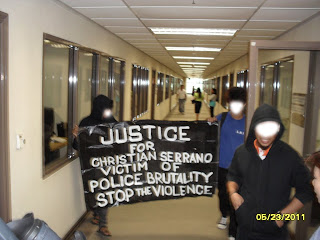 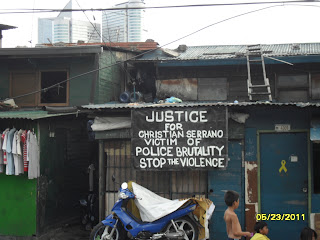 MAY 21 an action against police violence occur in Makati City with the participation of some autonomous individuals who drop a banner in Mantrade fly-over stating HUSTISYA PARA KAY CHRISTIAN SERRANO NA PINATAY NG PULIS “TUTULAN ANG KARAHASAN” (JUSTICE FOR CHRISTIAN SERRANO WHO WAS MURDERED BY COPS “DISSENT VIOLENCE”) and after hand-outs leaflets to all by passers.
MAY 23 2pm we went to the preliminary hearing of the accused police of murder in Makati City Justice Hall to give a support with the victims family. We can’t go inside to the justice hall because it is so full of people so we wait outside and post our banner.
This action is a support and also our way to show sympathy for the family of Christian Serrano 13 yrs.old a scavenger who was killed by cops, who falsely thought that the young boy was a thief; he is also one of a thousand victims of unstoppable police violence in this country.
We fearlessly condemned this act of unjustifiable killings of police and we will pursue this campaign against police oppression and violence until the people realized that police authorities are not the one protecting the ‘human rights’.
Posted by sysiphus at 03:57