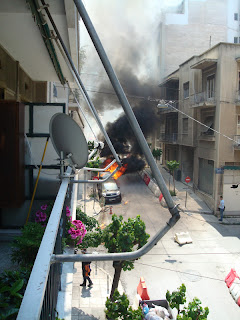 19/05/2011 - Maybe the most imperative moment to speak, is when an action of yours has the worst ossible outcome. Therefore it would be unacceptable for us, to shut up or not speak the truth, concerning the incidents on May 14th on Kallidromiou street, Athens.
Comrades chose to carry out a targeted (politically and operationally) attack on the 5th Police Station in Exarxia. A moment of struggle and a small answer of ours to the savage attack on the demonstration on the 11th of May, the undiscised cooperation of the Police with the Golden Dawn (neonazi group) in the recent rascist pogroms. To all these versions of the attempted totalitarian dictatorship of capital and authority on our lives.
We put in our discussions, every possible effort so that the attack concerns only the obvious target: the police. We aproached the Police station through the streets Trapezountiou and Mavromihali. We withdrew through H.Trikoupi and Methoni street. Presicely because we didnt want to involve the local Street Market. The only thing it provided, as an opportunity, to the people who openly resist in front of armed people, was the traffic jam it causes to the surrounding streets and the difficult approach of cops to the spot. In no way did we use the Street Market as a theatre of militant clashes.
We torched and destroyed three, personal cop motorbikes, on Mavromihali street without any people around getting injured.
We placed and set fire to a bottle of petrol in the entry of the police station in order to simply stop their exit, without however throwing it inside, putting in this way people at risk. We torched all vehicles that were right outside the station (of course no citizen can park there, for safety reasons).
The same moment, a safeguarding group that was on H. Trikoupi street, located and attacked a motorbike with two plainclothed cops on it. They stopped the motorbike and fought them away. The motorbike fell on H.Trikoupi, outside the limits of the market however very near to it. After that it was set on fire, mainly so there was no possibility of persecution from the cops that were fought off, who, incidentally were those who terrified invaded the market waving their pistols.
The tragic error was that it was mistakenly considered that the fire of the motorbike on H. Trikoupi could not extend itself to the stalls on Kallidromiou street, a few metres further down. And indeed, this is how it would be if the uncommon event of the explosion of the motorbike tank did not happen.
Nothing of the above revokes the RESPONSIBILITY (and the word responsibility here takes its genuine dimensions) and our sadness for the events.
In no case could it be, not even in the most remote corner of our brain, the indifference for the serious injury of a worker and the lighter injury of two others.
As political subjects we take in its entirity the responsibility of our action and its tragic consequences for the seriously injured worker, being foundationally and valuewise against any logic of adjacent losses.
From our heart we wish a full recovery to all three injured people and hope in their comprehension, for our motives but also our errors.