Sassari, Sardinia - Flames to the house of proprietors who sold land for radar installation at village of Argentiera 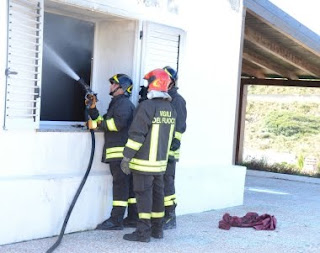 La Nuova Sardegna
Sassari. After the threats come the flames. Yesterday morning while the residents of the village of Argentiera protested to say "no" to a deep radar installation, a fire destroyed the home of those who gave land for the installation of military equipment.
The fire has burned the interior and furnishings of the villa by the sea of ​​the Brandimarte family, that owns a considerable amount of land in the area. In November last year, the general command of Finance had approached them to ask them to install the radar at Punta della Vedetta, now at the center of controversy.
Only a few days ago, when the inhabitants of Argentiera spread the news of
installation of the devices, was it known that the tower, 36 metres high, would be built on a plot of Brandimarte. Some threat had reached the ears of the entrepreneurs. Not too veiled. Last week the first warning. Someone deflated the wheels of the bulldozer arrived Argentiera for the construction of the radar. And a note (seized by the Digos) was also attached with the inscription: "If you want to save that machine you have to leave Argentiera."
Yesterday they moved to the deed. The fire - firefighters have found - was intentional. When the fire department of the provincial command arrived Argentiera with two trucks loaded with water at about 9.30 am, they found the electrical system of the house unplugged and a window forcibly removed. A short circuit has therefore been excluded and it is almost certain that someone, after breaking the frame, had introduced themselves into the white house and started the flames.
The place was also visited by the police in the company of Porto Torres. No traces of gasoline were found in the early investigations, but this morning investigators of the provincial command will return for more surveys.
Firefighters worked for two hours to douse the flames, but nothing of what was inside the house was saved. The fire consumed beds, sofas and appliances on the ground floor and then all that there was in a wooden loft. Damage, according to initial estimates, amounted to several thousand euro.
Investigators are trying to figure out to whom, in the area, radar can give so much trouble that, in addition to the identification of boats of illegal immigrants the drug trade coming from Spain and possibly even weapons can also be intercepted. But as well as the inquest opened yesterday morning by the prosecution, there is is that of private owners.
"I'm sure that those responsible are local people - Fabio Brandimarte, the son of the owner of the burned house said without hesitation. If we had not granted this land - he added - the Finance would still have dispossessed it. I was assured that this radar is not dangerous to health and when I can prove it, I will show the documents to the inhabitants dell'Argentiera.
May 18, 2011
Posted by sysiphus at 03:05