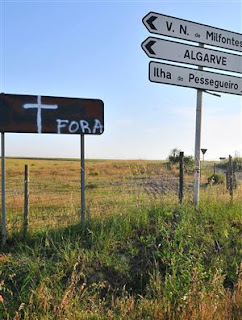 
02/06/2011 - Dozens of vertical signs of the Parque Natural do Sudoeste Alentejano (an administrative delimitation of part of the Portuguese coast) were vandalized last week. All the signs throughout 56 kilometers were painted black with a cross drawn on them. On some there’s also the word “Fora” (“Out”).
The authors are unknown. These actions come in the midst of protests against the new rules (control) of access to the coast, to fishing activities and others related to the administration of the “protected” Sudoeste territory.
Source from the Instituto de Conservação da Natureza e Biodiversidade (ICNB), institution responsible for the natural parks in Portugal, stated that they don’t make commentaries on vandalism, but also that “the damage is great.” “We’re talking of expensive structures, that take some time to be substituted”. The police are investigating.

Ps: On the internet people commenting on these actions say “vandalism or not, these signs are connected to changes, to the change they want to implement on Vicentina Coast; since the idea of turning it into a Natural Park occurred people are persecuted and see their customs change rapidly, their “quality of life” goes down and the small “extra” that filled the kitchen’s table lessens, tourism is rising and the once deserted places now always have someone on them, people are in revolt and the destruction of these signs is a way of showing their revolt and their “revenge” to those who desire to change what was always well... each one struggles with the weapons he has”. Another says “to cover everything saying natural park and icnb in these lands would be a small thing; go and place signs next to your homes you assholes”.
http://www.cmjornal.xl.pt/detalhe/noticias/nacional/portugal/destroem-placas-do-sudoeste
http://oceanusatlanticus.blogspot.com/2011/05/destroem-placas-do-sudoeste.html
Posted by sysiphus at 09:16