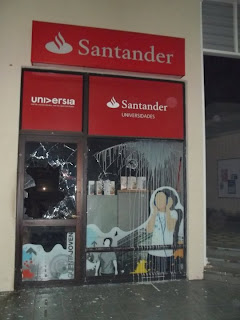 04/062011 - Today one day from the Luciano Pitronello's accident and then the foul media handling, Today when the Peñi have reached 80 days of liquid hunger strike, when the 'caso bombas' continues, when wages do not stop being worth less and Education is still used by the guardians of the capital as a tool of indoctrination. We masked up in Temuko and decided to break with everyday habits and show our discontent. Reclaiming the subversive struggle as a legitimate tool against capitalism and all forms of oppression.
Thus, when our spontaneity walks with us and the image of Luciano is no longer molested by the bourgeois press, a group of comrades decided to attack the headquarters of Santander in Santiago paradoxically located in front of the library within the university it is not surprising. The attack included molotov cocktails, paint, and camotazos that broke the cynical image of the thieves, with each stroke claiming the destruction of capital and all the institutions that crush the dignity of the oppressed, recalling with each stroke the act of overcoming fear, like the comrades early Wednesday at the intersection of Victoria Vicuña Mackenna, as they pick it up again today as an example of struggle and therefore against Capital and all authority.
Solidarity with Luciano and his family and all brothers that attempt and will act against capitalism and the state.