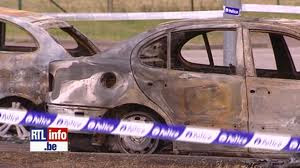 3005/2011 - BRUSSELS - During the night of Friday to Saturday, unknown persons burned down five cars belonging the guards of the prison of Ittre on their parking lot in front of the prison. The five cars were completely destroyed.
In the afternoon, guards went on strike for several hours to protest against this violent act of revenge, saying that there working climate is becoming worse every day.
In an interview with a spokesperson of the Ministry of Justice and of the Union of the Guards, they are saying that guards get more and more harassed by prisoners, ex-prisoners, friends and family of prisoners. They say it is very frequently that a guard is recognized when he is not on duty, gets insulted and even beaten. Also threats are often made, which then lead to repressailles in front of their houses etc etc. The Union is saying that "a molotov against the house of a guard is no longer an exception" and the Ministry denounces the increase of intimidation and threats against the guards and the staff of the prison, quoting an exemple where "guards, doctors, directors and social assistents working in the isolation module of the prison of Bruges get insulted when they leave the prison, harrassed and systematicaly photographs are taken from them."
28/05/2011
Video on http://www.rtl.be/info/votreregion/brabantwallon/798707/cinq-voitures-incendiees-a-la-prison-d-ittre
Posted by sysiphus at 14:22