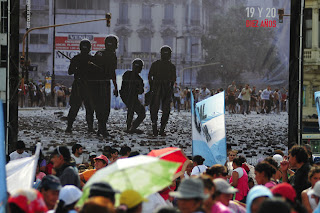 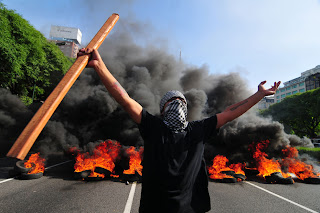 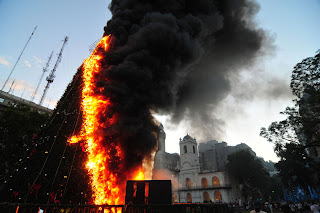 argentina independent
21 December 2012 - Various political and social organizations gathered yesterday [20] in Avenida 9 de Julio for what was called an act of remembrance for those who were killed as a result of police violence ten years ago.
The groups blocked traffic and burned tires in the street at the intersection of Avenida de Mayo as a way of protesting the events that happened during some of the most violent moments of the economic crisis on 19th and 20th December 2001.
Later they moved towards the Casa Rosada and set fire to the decorative Christmas tree put in place by the government of Argentina in the Plaza de Mayo.

The streets of Buenos Aires exploded on 20th December 2001 with police repression to the protestors who took to the streets starting the night before. The financial collapse and the extreme loss of wealth shocked the system. People were beaten, fired upon with water cannons, rubber bullets and eventually lead bullets, leaving to 39 dead. President de La Rúa fled the Casa Rosada by helicopter prompting a government collapse that saw the country welcome four new presidents in less than two weeks.