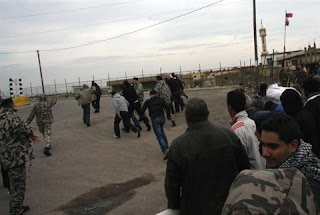 daily star
22/01/2012 - Arida, Lebanon: A tense atmosphere fueled by anger described the scene at the border town of Arida Sunday after residents held a funeral for a teenager who was killed when Syrian naval forces seized a fishing trawler carrying three Lebanese fishermen a day earlier.
During the funeral procession, angry residents stormed the border crossing, throwing rocks at the Syrian border outpost and shouting anti-Syrian slogans. Lebanese army personnel attempted to stop the young men from crossing into Syria but to no avail.

On Saturday morning at around 6:30 a.m., three fishermen, identified as Fady Hamad, 37, his brother Khaled Hamad, 33, and their nephew Maher Hamad, 17, were kidnapped by Syrian security forces after a Syrian naval vessel crossed three kilometers into Lebanon’s territorial waters.
Maher was shot in the stomach and killed when Syrian forces fired in the direction of the trawler, Arida residents said.
...
The Lebanese-Syrian border has become increasingly tense since the uprising in Syria began 10 months ago, with several incursions by the Syrian army, the killing of Lebanese citizens by Syrian security forces, and the firing at two fishing boats in August.