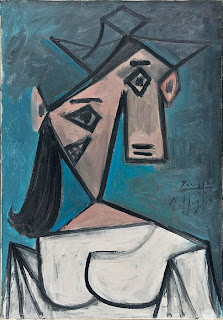 9/01/2012 - A work by Picasso was one of the two paintings stolen from the National Gallery in central Athens at dawn on Monday during a break-in. The second painting is believed to be a 1905 Mondrian, one of the two works by the artist in the Gallery's collection.

The thieves escaped undetected, raising concerns about the safety of other exhibits at the museum.

The Picasso is a 1934 work that was presented as a gift to the gallery in the 1940s by a French association.

Police said the perpetrators entered via the rear of the building, breaking in through a mezzanine balcony door that they demolished, before removing the two paintings from their frames.

It is also believed that the perpetrator abandoned an effort to steal a third painting.

Police have taken footage from the museum's surveillance cameras for investigation.

The gallery contains mostly 19th and 20th century Greek paintings, but had just wound up a display of its western European collections that include prints and etchings by German master Albrecht Duerer and Rembrandt van Rijn. It had been due to close Monday for a long period of extension and refurbishment.